So recently I set up a dionaea honeypot and I've been catching an insane amount of stuff. I just randomly picked this one to poke at and see what it's up to. I am running Windows 7 x64 in VMware for this analysis.

First off I opened it up in CFF Explorer: 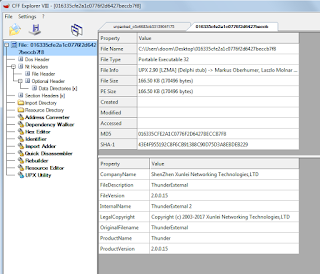 So it seems we have a PE32 file! It is packed with UPX so most likely it wont be too hard to unpack. The original filename is ThunderExternal and appears to be out of China. It says it was created by a company named "ShenZhen Xunlei Networking Technologies,LTD." Which seems to be a legit company:

It looks like they have a streaming service of sorts called "Thunder". But since this was dumped on my honeypot with no action on my part, I highly doubt this was created by them. This seems to be some sort of adware/fake browser according to some brief googling I did. Now for PEid! 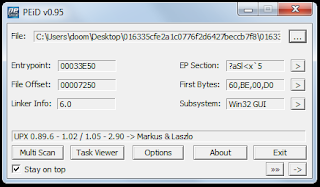 Using PEid, I was able to unpack it with the builtin UPX plugin. However as I found out later, there is further obfuscation. Here are the PEid results after unpacking: 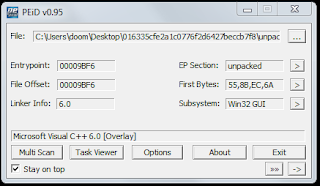 After unpacking I checked the strings output. Here are some strings that I found odd or interesting:

It seems this binary can do all sorts of stuff by the looks of it. There are a ton of different anti-malware process names in this. To me it looks like this might check to see if there is any anti-malware software running. Apparently it can also open and close your cd tray? Maybe at some point it will ask for a disc or something. A lot of the imports are for networking, which makes sense. Looks like it may alter or add a registry entry as well: "SYSTEM\CurrentControlSet\Services\%s"

I used urlscan.io to scan the URL I found: 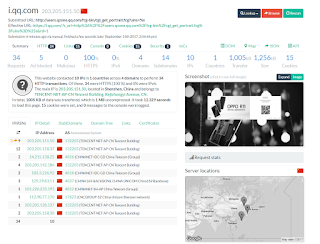 Looks like an ad for a phone? My first thought was this might be the default landing page for this browser. There is a QR code there as well. I'll dive deeper into this later on.

One thing I found in its resources that I thought was funny was this crappy IE icon ripoff that it uses:

The next thing I want to do is some basic static analysis in IDA. IDA was able to locate the WinMain function, so that was the first thing I looked at.

After following some of these call instructions I noticed a lot of these calls are pointers to hard-coded out of range memory addresses.

This function was interesting to me.

From some brief research I found that winse.exe is not an actual Windows service. The name is very similar to winsec.exe, which is another known malicious executable. Notice the gibberish as well. Has a bit of a repetitive pattern to it. The string "Meumeu Nevne" is referenced many times throughout the code.

There is more obfuscated code in this binary. De-obfuscating is something I need to practice so hopefully this will teach me a lot in the end. The more I think about this, I'm starting to wonder if this targets a specific piece of software or service. Maybe the "Thunder" streaming service?

Wish I could get this to run to do some dynamic analysis on it. As I expected, this raises an exception when I execute it because of the hard-coded out of range memory addresses. I will update this as I continue...
Posted by Unknown at 11:04 PM No comments:

How to Get Into Reverse Engineering: Where to Start?

One of the biggest hurdles I experienced when getting into reverse engineering was finding an entry point into this seemingly arcane realm of the computer world. It is not an easy subject by any means, nor do I claim to be an expert in any way, but hopefully by writing this blog post I can ease the process of learning about RE.

This is meant to be a high-level guide on how to build a solid foundation for getting into RE. My goal with this post is to provide direction rather than technique, so I will not go in to great detail on each subject. I am going to be focusing x86 and x86_64 on Windows and Linux (mosty Linux), as this is where my experience has come from. I will post a "Further Reading" section at the bottom of this post as well. I want to pack a ton of resources into this and I'm sure I will continually update this as I find new stuff to add.

Code: The Hidden Language of Computer Hardware and Software by Charles Petzold

How Linux Works by Brian Ward

That last one is the most important in the list. Do research! If you don't know something, Google it! Or use Bing if you are a serial killer. But seriously, the best tool in RE is the ability to read. If you ever wonder how something works, look it up. Chances are someone else has had the same question you do, and they may have answered it. If no one else has answered it, maybe you can be the one to provide the answer to everyone else! That's the beauty of the internet.

Learn to program! This is VERY important. I'm not saying "Become a Level 20 C++ wizard!" or anything to that extent, but it is absolutely necessary to understand how programs function. There are more than enough resources out there to learn whatever programming languages you want, but there are a few languages that I highly recommend becoming very familiar with:


These are by no means the only languages you should become familiar with, but in my opinion I found that these are prevalent enough to be considered necessary. Also, I am personally a mediocre programmer. I mostly just write specialized programs for myself when I need to. The idea of developing a large scale program actually sounds pretty terrible to me. But what I do have is the understanding of how a program is written, compiled and eventually, run (Which is what counts right?? ;) ). Here are some programming resources:


Learn how executables and binaries work! Learn about ELF binaries, PEs and DLLs! Learn about what the OS does when they run, and what happens in memory at runtime. How can you reverse engineer something if you don't know how it actually works?

These next resources are geared towards the memory management and processing side of things:

What Makes it Page? by Enrico Martignetti


So far I have only covered the informational aspect of things and not practical application. This is the area that most people get stuck at when trying to get into RE. I got stuck here big time. Not only is this the hardest part to learn, it is also the hardest part to teach. There is no single right way to reverse engineer. It is a topic that is too vast and there are far too many variables involved to create an effective "all encompassing" book or course. There are tips and tricks people can teach you along the way, but the majority of the heavy lifting will have to be done by you. This is where critical thinking, logical analytic skills and abstract thought come in. The ability to really visualize what is going on and being able to think in an abstract manner is invaluable. Even though the world of computers is very logical, it seems incredibly abstract in contrast to the way our brains are wired. This book will be a huge help and it will teach you C++ as you go:

Now that we have the knowledge and hopefully some magic new brain skills, it brings us to our next topic: Tools! There are a plethora of RE tools out there, almost an overwhelming amount to be honest. Which ones should you use? Well, it all depends on what you're doing and what you prefer.

My preference of diassembler and debugger when I am working in Windows is using IDA Pro:

IDA Pro is an incredibly advanced disassembler. I highly recommend becoming familiar with it. There is an amazing book you can read to do so:

Not only is it a great book on IDA, it is a great RE book in general. Here is a pretty good intro using the demo version:

My preference of diassembler and debugger while working in Linux is is radare2:

Here is a quick intro to GDB:

And a full book on radare2:

Well, I don't know what else to say, so this will be it for now. As I stated earlier, I will continue to add material as I think of it.

The Art of Memory Forensics

This is amazing. So much information here.